I went for a run on the Esplanade on Thursday after work.  I didn’t want to miss goodbye dinner/drinks/karaoke for one of my coworkers, but I also didn’t want to miss my run. So, I did my best to forget that I’m a giant spaz, and I left work for a run before meeting up with everyone at the bar. 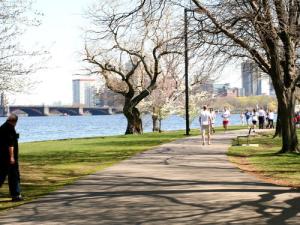 This is where I ran. Photo from: http://www.gogobot.com/charles-river-esplanade-boston-attraction

This probably wouldn’t have been a big deal for a normal person, but like I mentioned before; I’m a giant spaz.  I don’t really like unfamiliar running routes…what if get lost?  I’m pretty good at getting lost. And, part of this route was through the city…there are cars! and people!  and more cars!

Then if I’m lucky and don’t get lost or hit by a car, I have to shower in an unfamiliar shower..what if it’s gross? what if someone steals my clothes? what if I lock my clothes in a locker so they don’t get stolen, but then somehow I can’t get the lock open and I have no clothes? <okay, that last one’s pretty unlikely>

Let’s assume I don’t get lost or hit by a car, and the shower isn’t weird or gross, and I don’t somehow lose access to my clothes; well, did I pack everything I need? I’ve got a towel, shampoo, my sunglasses, socks, and on an on, but did I forget something important? What if I forgot something important? Then what? —-  Well, you get the point, right? Amy = Giant Spaz.

Luckily, I was able to overcome this and get my run in.  It wasn’t the most relaxing run–running is a major spaziness reducing activity for me– but nothing horrific happened. (Although, I really think that the MAN that cleans the WOMEN’S locker room should really knock before coming in.  I was dressed, but this is just asking for trouble in my opinion.)

All in all, I was able to act like a normal person, and (aside from all the people) it was a pretty nice place to run!  Plus, then I didn’t feel super guilty about the french fries I had for dinner!

Not the ones I had for dinner, but you get the point!

One thought on “Running The Charles River Esplanade: AKA Amy pretends to be a normal person.”