Well, I’ve finally gotten used to running in the cold.  It’s not so bad, really.  You just need to know how to dress. Running clothes are stretchy, so you can always just throw on another shirt.  Unfortunately, when I’ve got 4 shirts on and two pairs of pants, I kind of start to feel like Randy from A Christmas Story.

Bending my elbows and knees is a little restricting, but hey, who needs full range of motion when they’re running? haha It’s actually not really a big deal when you’re going at half speed in order to not slip on ice, so everything pretty much works out.

This week, we got our first real snowfall of the season, and although I kept being told I was crazy; I still think running in the snow is a great time!  And truly, much safer than a) running on black ice b) driving through the snow to the treadmill at the gym.  Plus, it’s warmer when it’s snowing, so I got to go back to wearing only 2 shirts and I single pair of pants.  🙂

Don’t believe me that running in the snow is magical?, maybe some pictures will change your mind: 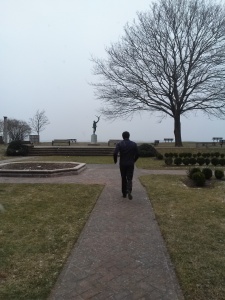