Jeff and I spent the week of Christmas in North Tonawanda with my family.  In between all the eating, gifts, and games, I was able to squeeze in my minimum 1 mile per day for the streak.  Aside from 12/22, the day before we left, I kept my runs for the week all under 2 miles.

12/22 was my first “long” run in a while.  We did 6 miles, heading over the bridge into Salem for the first time in a few weeks.  I had a bit of a tough time on the long gradual uphill about halfway through the run, but I was able to pull it together and finish strong. I’ve been going faster lately, but I still can’t believe that my long runs a couple months ago were 20+ miles long…how on earth did I do that?  I was tuckered out after my 6 mile run, and I think it was a good thing to have a bit of a rest for the next 5 days.

There are two adjectives to describe running in North Tonawanda:  flat and snowy!  Yes, I’ve had a couple snowy runs in Beverly, but it snowed EVERY SINGLE DAY we were there.  🙂  While I generally enjoy running in the snow and I wouldn’t want to run on Christmas without it, it can be kind of a drag after a while. It requires a lot of focus to not slip and fall, and it’s rather slow going.  Lucky for me, my mom has a treadmill, and  I did my 1st two indoor runs of the streak. 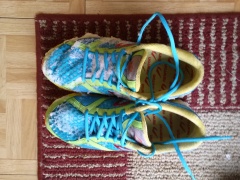 I was driven inside by the fact that I didn’t get around to running until after dark on Thursday, and I didn’t bring any of my running in the dark gear.  I had to improvise a bit with clothing (I only brought outdoor gear), but it was only a mile so no need to be picky.  I really don’t mind running on the treadmill, and it was WAY faster.  In addition to eliminating slipping and sliding in the snow, it really cut down on my prep time.  With the multiple layers, hat, mittens, and waiting for a signal on my GPS watch; it actually takes me longer to prepare to run a mile outdoors than to physically do it.

What kind of Christmas post would this be if  I didn’t tell you all about the  awesome running related gifts I got for Christmas?

P.S. I made this cool collage of pictures from Christmas. I’m not sure why it’s so tiny (???), but it was fun…so, enjoy!