I usually start my top 5 Friday post before Friday. It’s surprisingly difficult to come up with Top 5 lists. (On a related note: this top 5 Friday thing might be short lived) I’ve gone out on a limb here in deciding to list the top 5 things I learned while trying out spinning, because I just went to spinning this morning. Before you begin reading, you should know this isn’t really a top five list, it should probably be titled “Amy rambles on about 5 things she thought of before, during, or after her first spinning class”.  I hope it’s still entertaining! 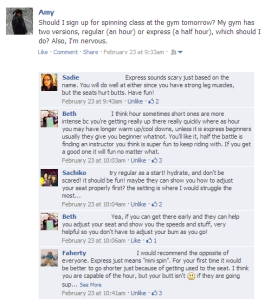 1. Facebook friends are great for motivation and know everything! I was nervous about trying spinning, and posted about it on Facebook. I immediately got a bunch of responses encouraging me and giving me tips. Thanks, friends! Even though I normally wouldn’t have bothered to ask about it at the gym when online sign-up for the class didn’t work, I felt like I had to because I owed it to all the nice people to at least try.

2. My body weirdly can’t regulate it’s temperature when I exercise. I don’t sweat a lot compared to normal people. When I was a kid my sister used to tell me that if I wasn’t dripping with sweat, it meant I wasn’t trying hard enough. I’m not really sure what kind of activity we were doing that she was being so intense about (we mainly played kickball or knockout), but this little snippet of conversation has stuck in my head for years. (Thanks, Beth, you sweaty BEAST). Anyways, I noticed over the years, that although she might not be right that I wasn’t trying, my sister had a point about my lack of sweat. I just don’t sweat a whole lot. But it’s not just that I don’t get sweaty, I don’t feel hot very quickly, and once I get warmed up, if I stop exercising I will become cold astonishingly quickly. Okay, I guess this isn’t something I learned at spinning, but spinning reminded me because the room was warm. (Seriously, who designed a spinning room w/ 25ish bikes to have a single diffuser , and only about 4 feet from the return grille…amateurs!) I still didn’t start sweating until about 10 minutes in, while everyone else was dripping sweat before I even took off my long-sleeved shirt…I felt like a slacker. And then when I left, I was frozen the entire rest of the time I was at the gym even though I was still exercising. I’m such a weirdo.

This is not at all what real spinning class looked like.

3. Spinning is LOUD One thing I was excited about for the class was the music. I had heard that the music could make it fun and really get you moving. Well, the music was kind of lame. It made sense with the class, and flowed well, but it really was just blah. I don’t know how to explain it, but it just wasn’t fun music. And, it made it really hard to hear the instructor. I basically had no idea what was going on anyways, and then I could only hear every fifth word. For example, at one point this is the sentence I heard “blah blah ATTACK blah blah!” (Um, okay? I’ll go fast then?) And I wasn’t far away from her, and she had a microphone. I blame the music. Oh, also, there’s this fun thing where you spin to the beat of the music. HA!  Yeah, I’m coordinated enough for that, sure..what if we go back to attacking things instead?

Also, didn’t look like this. Look at all those smiles…nope

4. If you think you’re going to do an easy run after spinning class,  you might be insane. If you actually do it, you probably are. I went to the class with the idea that afterwards I would do an easy 3 mile run. I skipped my run last night in order to stay home and watch Friends and play board games, so I wanted to squeeze it in today if I could. About 10 minutes into the class, I started to doubt this plan, then at 30 minutes I was definitely NOT going to run. But when  class ended 20 minutes later, we cooled down and stretched for a while before leaving, and my legs lost their jelly-like quiver fairly quickly. So, I decided to hop on the treadmill and put on my new favorite virtual run and see if I could get in some easy miles. After about 1/2 a mile, I stopped feeling like I made a huge mistake, and running felt just like normal.  I couldn’t run at any sort of an incline without really feeling it, but I think this easy 3 miles made my legs feel looser and more normal after the shock of something different. I have a new respect for triathletes who can transition from biking to running without just falling over.

Obviously, these aren’t the only 5 things I learned while spinning, nor are they actually all about spinning. I hope you weren’t looking for a comprehensive guide to spinning for runners! There probably is one somewhere out there (like here, and here, and a million more places). Spinning is hardly new anymore, and I’m pretty late to the game just giving this a shot right now, so a lot of you probably already know all about it.  I might come up with some actual tips a little later on, after I’ve gone a few times. One of my friends (shout out to Fay!) suggested I not judge it until I’ve gone at least 3 or 4 times, and I think she gives pretty good advice, so that’s what I’m going to do. Besides, it’ll probably take me at least that long, if not longer, to figure out how to set up the bike properly.