As I mentioned in my Up Next post last week, I’ve been  obsessing about which Fall marathon  I should run, and should I run a Fall marathon? And also, when to start training, which level to start on, and on and on and on. Seriously, at this point, even I’m starting to get bored thinking about it.

“I see the finish line! When’s the next race?”

I obviously didn’t sign-up for and run another marathon a week or two later, and eventually that compulsion died down… a little. Instead I took a little time off, scaled back, and then ran three holiday 5k’s over the span of 10 days- Holden Road Race (Thanksgiving), Run-a-Latke (Hanukah), and the Reindeer Run (Christmas). This was also the start of the Holiday Running streak which I managed to keep up for the entire time between Thanksgiving and New Year’s.  I set a 5k PR in the Reindeer Run, and a 4 mile PR at the Wicked Frosty Four on New Year’s Day. And, I started to get into the habit of writing this blog. Looking back, I’m certainly happy with how I channeled that I MUST RUN ANOTHER MARATHON energy into some other productive goals.

After all that, when I sat down to write my 2014 running resolutions, I felt like it was a good time to revisit my goal of a sub 2 hour half marathon – and that goal took the number one slot on my resolution list. But I was also still itching to run another marathon, so that made the list, too. Sort of. Technically, the resolution is to run a fall marathon with my sister in law if she wants to, and if she does’t want to, then the resolution is to decide whether or not I want to run solo. By mid-April (maybe earlier), I was feeling pretty confident that I would run solo if she wasn’t ready to tackle a marathon yet, and I began stalking races, and training plans. (Good job focusing on my upcoming half, right?)

Then I ran the Twin Lights half marathon, crossing that first resolution off the list, and I became OBSESSED with the marathon idea. I bought the training plan I’ve had my eye on for a while. And, I started really looking into “local” races. I read race reports, studied elevation profiles, investigated exactly how far each race is from home, and fiddled with a training schedule for each potential race date. And then…well, after all that, I still couldn’t make a decision. 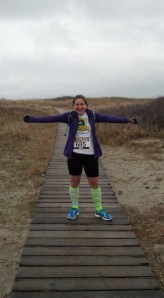 Bring on the marathon!

I started out thinking that I would likely choose the Cape Cod Marathon as my fall race. I’d heard it was a nice scenic course, it’s at the end of October, I’ve never been to the cape, and for some reason I’m supremely interested in visiting cranberry bogs. But I just couldn’t pull the trigger on it. For one thing, it’s hilly. I might be able to overlook this, but the hills are at the END. Judging by past experience, the end of the marathon is not the right time for things to get hilly. Also, the cape is not actually very close to where I live. Yes, it’s closer than Niagara Falls, but it’s still a 2 hour drive.

So, I wasn’t sure about Cape Cod, and I decided to check out some other options. I found 3 that seemed appealing – Manchester City Marathon (Manchester, NH), the Baystate Marathon (Lowell, MA), and the Miles Standish Marathon (Plymouth, MA).

They all have positives and negatives, too and none of them really stood out as the clear choice. Days went by, a week, and I still couldn’t chose. It’s not that I need to sign up right away, but I needed to know what day the race would be if I was going to plan my training schedule. Which brings me to the other object of my intense scrutiny.

Before my half marathon when I was becoming enamored with the idea of Fall marathon, I saw myself continuing to run at least 10 mile long runs on the weekends after the race, but not starting actual marathon training until June, possibly July. I was eager to get started on the new training plan, but I wanted to take it slow.

Then I realized that if I was going to have any hope of making it through all 24 Levels of my new plan, before the Marathon I had not yet chosen, I’d have to start training right away, and not on Level 1.  The plan recommends that I can start on Level 8 because of my current fitness (can run a half marathon and have been doing speed workouts), but my legs were WIPED OUT by the hard effort at that half marathon. Also, my hamstring isn’t at it’s best, so I’m trying to do some strength work to build up my hamstrings and glutes. I’m doing these exercises three times a week (as previously recommended by a PT), so these muscle groups are never fresh. None of this is ideal for the start of marathon training. Plus, I really wanted to start the new training plan on the first level. My legs are still recovering so it just seems like a good idea to get used to the new types of workouts by doing the easier versions.

So, I waffled about even more. I didn’t want to pick a race because that would mean that I needed to start training, and I wasn’t ready for that quite yet. And, honestly, it’s May, I feel like I shouldn’t have to start training yet.

With all of this in mind and some wise council from my husband, I decided not to decide yet. If I’m going to do a marathon I really need to be all in, and I’m not there. One thing I’m sure about is that I want to start on level one of my new training plan, so that’s what I’m going to do. The long runs in the early levels are very short, so I’m running longer because I like long runs. I’ll keep checking the races in case they start to fill up, and eventually I’ll know what I want to do. I won’t get through all 24 levels of my training plan before the race (if there is one), but as long as I can keep my long run miles up, I know I’ll be okay. I just need to calm down. 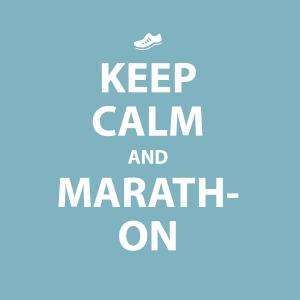 Do you obsess over races? Are you as picky as I am about which races to run? Which Marathon should I run? Should I run one? Isn’t it kind of nice not having something big on the calendar?