I’ve been seeing Throwback Thursday (aka #TBT) stuff all over the internet lately. Looking at people’s old pictures is usually good for a laugh, but I haven’t jumped on board and participated at all.

But, instead of posting pictures from when I looked like boy and/or was shaped like a rectangle, I’m going to tell some stories and recap some races from my pre-blog running days. (Of course, I’ll add some pictures when I can).

My first real experience with running was when I played soccer in high school.  We ran a lot. And I hated it. My coach (for the first two years) was also the school’s track coach, so I always assumed we ran so much because of that. However, after he left, we did not run any less so it’s possible we just ran so much because it made us better at soccer. 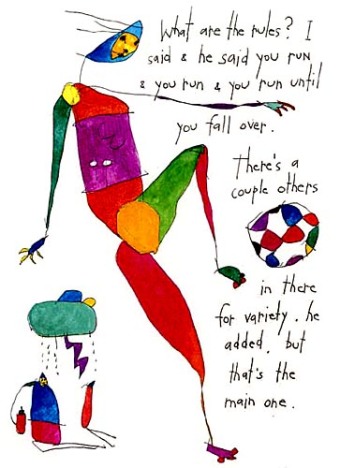 Brian Andreas’ take on soccer. He couldn’t be more right.

The kind of running we did on the soccer team was different than the kind of running I do now. We’d show up at practice and stretch and then run as a team for 1 to 2 miles (at least this is an approximation of what I think we did, but it was something like 15 years ago, and we never measured it). We ran as a team, and occassionally we’d sing songs to help the time pass. We ran in our cleats, and mostly ran on the grass, but also on sidewalks. I always liked the sound 20+ pairs of cleats made when running on concrete (although, I know it wasn’t good for our shoes, and probably not our legs either).

Aside from the running at the beginning of practice, we sometimes did running drills during practice too. These were mostly sprint drills. We ran suicides and some type of intervals, and I even remember running up and down the field carrying another player piggyback. (Was my coach just doing this for a laugh?)

We also did a lot of laps around the field. On days before games, we ran less at the beginning of practice and maybe just did a couple laps. We were threatened with laps if someone was late. The rule was that the entire team had to run one lap for every minute the person was late. The late person watched. (I only remember this happening once, and we ran something like 38 laps around the field, and the girl who was late cried – she definitely felt worse than we did.)

But it DID make us a better team. Even then I realized it. I always thought we were a fast team, that we could outrun the other team. And I was proud that we had the best off-sides trap in the league – may or may not be related to the running. (Any Mounties out there reading this? Don’t you agree?)

And now for that TBT picture you’ve all been eagerly awaiting: 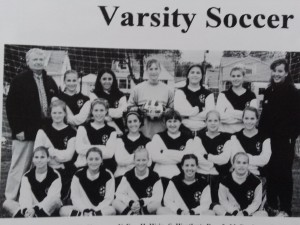 This is a picture of a picture out of my yearbook. Can you find me? Middle row, 3rd from the right. When searching for it, I found something else that I completely forgot. I used to sign my own yearbook/write myself a note every year. I’m embarrassed for myself.