This weekend was the 3rd long run in my “maybe I’m going to run a marathon” training plan. And, it went great! The first two (8 and 9.5 miles) were very difficult, but this one was awesome. Don’t get me wrong; it was still exhausting, but this 11 miles somehow felt much much easier than the 8 mile run I did two weeks ago. There were only a couple of sections at the end of the run when I wished I was done, but I didn’t stop even when I had to run past my front door in order to bring my final total up to 11 miles.

View from the top of the bridge.

I’ve been running portions of my long run route from marathon training last summer – starting out the same way, but cutting off miles at the end according to the distance I need for that day. Last summer I thought it was really fun to add on sections to the run every week and see how the route changed over the summer. So far, I’m liking doing that again, but I’m in a bit of a tough spot.

My route has 3 different sections, and right now I run the entire first section and am increasing the distance I run on the second. Here’s where the problem comes in: this second section starts with a “giant” bridge. It’s not an exceptionally steep or long climb when I look at my Garmin elevation profile (the liar!), but it is always a challenge for me. And right now, I am crossing the bridge at the end of my run. Last week, I crossed the bridge, turned around and came right back – ugh! This week was a little better – I had about a mile before I ended up crossing back over. But, both times, getting up and over the bridge was SO HARD.

I know that I could change around my route so the bridge is earlier in the run or not in it at all yet, but part of me thinks that the giant hill in the final mile of my run is probably good for me. And, it’s only going to get better with time. As I add more and more miles, the bridge will eventually be closer to the middle of the run than the end. And I’ll have more miles after crossing it before I have to make the return trip.

Can you see the bridge in the distance? That’s the bridge I’m talking about.

I’ve been run/walking my long runs these past few weeks. For the 8 and 9.5 mile runs, I would run a song, walk a minute, repeat. Very precise, I imagine. But this week for the 11 miler, I ran for 0.9 miles and then walked 0.1 mile. And I LOVED it. I did this for two reasons – I ran with an audiobook instead of music, and I wanted longer sections of uninterrupted running. I was a little nervous about how I’d feel at the end of the run, but I ended up averaging a faster pace and feeling less tired than I did on the first two runs. (Just to be clear, I don’t think this change in run/walk strategy contributed to me feeling better, but at least it didn’t have a negative effect).

The new strategy, mentally, was a huge boost. I was able to get into a better running grove on the run sections, and I averaged an overall faster pace than the previous two runs – which made me happy. Also, I kind of inadvertently started thinking of the run as an interval run, and counting down the running portions gave me a little boost. 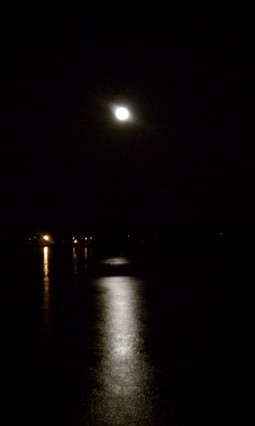 From the bridge, at night.

I have one more little bit of news before I wrap this up: I SIGNED UP FOR A RACE! It’s called The Bridge & Back 10k. There was no map on the website, so I don’t know the exact route, but I know where it starts and I know that at some point we run across the bridge – the one I’ve been yammering on about – and then eventually we run back. Hooray!

I tend to shy away from summer races (heat makes me slow, then I do bad and get disappointed), but I made an exception for this one. It’s right by my house, and my friend is running it! And, it’s her first, I think, 10k!! And we’re going to have a sleepover the night before. How awesome is that?! Also, it’ll be my first race as a 30 year old! Great things all around.

Note: I didn’t start out with the intention of putting all bridge pictures in this post, but once I realized it, I couldn’t help myself. Foreshadowing! 🙂

Anyone else love running races on roads you train on? Isn’t it funny how an 11 mile run can feel easier than 8 mile run? Do you run/walk/ride across any bridges?