Am I actually writing one of these Throwback Thursday posts? Crazy! It’s kind of funny; the whole reason I wanted to start this little series is because I wanted to recap my old races on the blog. I started the series writing about how I first started running (the boring preamble, in my mind), but then when it finally came time to write about my first race, well…other things came up, and it’s been over a month since the last Throwback Thursday post. Weird how that happens, isn’t it? But I’m back at it now and ready to recap!

Unfortunately, I don’t have any pictures from this race to include in the post, instead I took a little creative license here. First, please enjoy this photo of my niece wearing my old clown hat. (In case you’re wondering, this totally counts for throwback Thursday because I used to wear that hat a long time ago.)

Photo courtesy of my sister!

When I first started getting into running, I never looked into local races. I always thought it would be neat to run a marathon some day, but racing just wasn’t on my radar for quite a long time. After about a year of running, I saw an ad on the subway and it made me think that maybe the time was right.

The ad was for The Run to Remember, a race to benefit families of police officers injured or killed in the line of duty.  There were two options, a half marathon and a 5 miler. At the time, I was consistently run/walking 5 miles a few times a week, so that option seemed perfect for me, and when I’d finally seen the ad enough times to remember it, I signed up.

I didn’t change much about my running routine in preparation for the race. I continued to run exclusively on the treadmill about 3 times a week for 5 miles. The only thing I did differently was to make an effort to eliminate walk breaks. By the time race day rolled around, I could run 5 miles without stopping in about an hour.

What’s that, this pic doesn’t apply either? Well, the puzzle says Boston, and that’s where this race was, so….yeah, totally works.

The Expo & Morning of the Race

I decided to go to packet pick-up the day before the race in order to avoid extra craziness the morning of the race, and to give me a little extra time to sleep in. Also, having never been to the start before, Jeff thought it would be a good idea to know how long it would take to get there.

There were not very many people hanging around the expo, and it was not very impressive. I think we may have arrived either before or after the thing began. In general, I’m not a big expo person, so in retrospect it’s not surprising that this one didn’t excite me.

The morning of the race went off without a hitch. Jeff and I took a combination of walking and public transit to the start line. We saw a few other racers on the ride there, and it was pretty exciting. Before the race, running was very much a solo endeavor for me, and it was cool to feel the camaraderie that you get at races.

You thought the last few pictures didn’t apply? Ha! This is a radiator. You guessed it, a really OLD radiator….totally counts!

Shortly after lining up, the national anthem was sung and the gun went off. I’d lined up towards the back, and it took a little bit of walking and shuffling along before I crossed the start line and everything erupted into chaos! At least, that’s what the start of the race seemed like to a newbie. Some people took off like they were hoping to win the race, while others continued to walk and chat (oblivious to others around them.) Most people started darting around and zig-zagging like they were trying to get lost in the crowd. I had never seen anything like it. And the whole process was such a huge distraction that I was shocked at how quickly we reached the first mile.

As we ran through the first few miles, things had calmed down and I was just cruising along enjoying the scenery and people watching. Not only was I new to races, but I ran exclusively on the treadmill at the time, and all of this action was quite exciting. The course went through downtown Boston, nearly passing by the office building where I worked at the time, and one of the best parts was getting to run the streets that are usually so packed with cars. It’s still one of my favorite things about races with road closures: feeling like we own the roads for just a little piece of time.

With all the excitement and novelty, miles 2 and 3 passed almost as quickly as the 1st, but as I closed in on the second half of the race, I started to wilt a bit. I was not used to running outside, and my legs were getting tired from the elevation changes as well as pounding the pavement. Simultaneously, I noticed that it was getting pretty hot and sunny out there – another thing I wasn’t used to. These miles felt like a lot of work, and I was eager to be done.

After what felt like twice as much time as the first 3 miles combined, I finally turned a corner and started up the final bridge. The finish line was in sight (if somewhat far away), and I was thrilled to be on my way.

And then my iPod died. I had never run without it, and the silence was unnerving and distracting. Pushing up that last hill had suddenly become ten times harder.

As I finally crested the hill and took off for the finish, I swallowed a bug. It tasted BAD.

Again I was distracted and really not focusing on finishing my race. But I kept plodding along (seriously, why was the finish line so far away?) As I got closer and closer, I noticed people holding up a ribbon. What’s going on? I’m clearly not in first. Is someone special behind me? And then I was directed off to the side. I ended up finishing to the left of the big finish line in some mini version of the finish shoot. I grabbed my bottle of water and medal, returned my shoe chip, (remember when you had to tie them into your laces and then give them back?), and turned back to see the winner of the half marathon barreling towards the ribbon. That race had started slightly before the 5 miler, but I was still amazed (and still am) at how quickly someone was able to run a half marathon.

Afterwards, I stumbled around looking for Jeff in a bit of a daze. It didn’t sink in right away that I had run my first race. It was a weird finish, with my iPod, then the bug, and finally being detoured out of the way. But by the time I found Jeff, I was excited about my time and couldn’t wait to tell him all about the race.

Overall, I had a terrific time, and afterwards, I couldn’t wait to sign up for my next one. 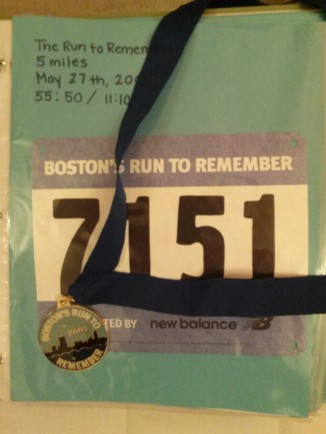 What’s this? A picture that has something to do with the actual race! That’s crazy!

Do you remember your first race? Do you have pictures of it? Any weird things happen?