I originally signed up for the race because one of my friends was running it, and it was going to be her first 10k. I didn’t want to miss such a momentous occasion, especially because the race was taking place right in my backyard.  To be completely honest, I would not have signed up for this race if it wasn’t for her. I don’t normally enjoy summer races (too hot, too humid), and I knew this course was going to be a challenge because it crosses a bridge I frequently run over.

Unfortunately, my friend ended up not being able to run the race. In addition to feeling pretty bummed on her behalf, this detail made me stop looking forward to race day. These things happen though, and even though my plans had changed, I knew I should run the race and be grateful that I could. Plus, I found out that I had another friend running, and I hadn’t seen her in ages.  So even though I don’t like summer races, was unhappy about the route, and wanted to get in a long run that weekend, I still never really seriously considered not running the race.

The day before the race I finally got a look at the route map. The race website was terrible and uninformative, and didn’t have a link to the route (that I saw) until fairly late in the game. (These days, I rarely go into a race blind, and not knowing the route had been driving me crazy. I used to never care about routes or elevation maps, and for years I wouldn’t even bother looking at them. I even ran my first marathon with no for knowledge of the course, which to present day Amy, sounds totally insane.) So, I was glad to finally see what the race course was going to be.

The good news was that it was primarily on routes I run all the time. The bad news….it included my arch nemesis. Dun Dun Dunnnn. 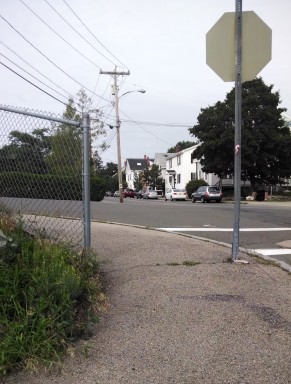 This turn/uphill is the WORST part of every long run I do.

On race morning, I woke up to cool temps and overcast skies…perfect! I ate something (banana? smoothie?) and picked out and donned my running gear. We live a short drive from the start, so there wasn’t any time pressure and getting ready felt pretty relaxed. On the way over Jeff and I discussed our race strategies/goals. (Did I mention Jeff was running too? Well, he was.) I didn’t really have much of strategy: start slow and then pick up speed once we reached the top of the bridge. And my only goal was to come in under an hour, but I wasn’t really invested in a specific time; mostly I wanted to run hard enough that I felt like I could get a bit of an idea of where I’m at in my training. We decided we’d run together at the start until one of us (me) went excruciatingly slow on the first hill, and then we’d see if we ever caught up with each other again.

We reached the start line just in time to run into my friend, Jess, and her adorable 1 year old who were both doing the race. FYI: Jess is a superwoman who was pushing a jogging stroller up and over hill after hill after hill.

See..I got excited for the race after all.

The race started on a cobblestone side street in Salem and we immediately turned and headed for the bridge and Beverly (the city, not a person named Beverly). It was a pretty typical start: a bit crowded, some runner dodging, fiddling with my Garmin, and hoping my legs would wake up and realize we were running a race. And before long, we were heading up the bridge. Jeff took off, and I settled in to the first climb. I couldn’t help but notice that Jess and her jogging stroller, were also speedier than me on this first climb. As I was passed by runner after runner, I was starting to get excited. Because, although I may stink at climbing hills, I have a secret weapon…I am one heck of a downhill runner, and a huge downhill was coming! (Yes, I know, downhill is easier for everyone, but I swear I have some kind of an edge.)

As we crested the top of the hill/bridge, I moved to the outside, and flew down the bridge. Passing all those stinkers who had just passed me, including Jeff, King of Stinkers.

When I hit the bottom of the bridge, I kept motoring along. I wasn’t paying a ton of attention to distance or pace, and before I knew it I hit the 2 mile mark…and my nemesis. 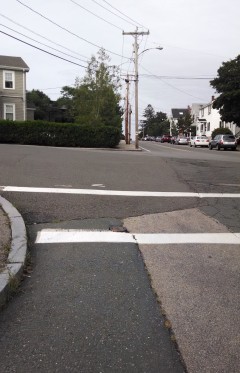 It really feels to me like I”m going straight up.

And, you know what happened when I ran up that tiny, steep hill? It wasn’t really so bad. Turns out that the reason it’s so terribly difficult is because I only ever run up it in the last mile or two of my long runs. At mile 2 of a race, it was tough, but really didn’t deserve the fear and hatred. haha.

The next two miles were uneventful as we ran around Beverly near the beach and through some residential roads. All of this was very familiar, and I was back to my nemesis, this time running down in almost no time at all. At this point, Jeff had caught back up to me and we ran together for a ways before we hit the bridge again.

The second time across the bridge went about as well as I expected….slow. It was pretty nice getting to run in the street for this race because in some places the brick sidewalk has some fairly large holes created by missing bricks. Anyways, I eventually made it to the top of the bridge and sped up again on my way back down. I wasn’t able to catch Jeff on this descent, but I could see him up ahead. I was starting to fade, but I kept my eyes on his back and tried to push myself to close the gap.

With about a mile to go, Jeff stopped to fix his shoe, giving me the time I needed to catch up to him, and we ran the remainder of the race together. This was the only section of the course I was unfamiliar with, and it was a doozy! I was tired and not expecting the two small hills we had to run to reach the finish, and they were not a pleasant surprise.

Soon enough we turned the last corner and could see the finish line ahead of us. We sped up and zoomed to the line.

That last push was exhausting, but the water and frozen yogurt at the finish line rejuvenated me pretty quickly. Plus, I was thrilled with my finishing time of 56:12 min, an average of 9:03 min/mile. I positive split this race, with the first 3 miles falling around 8:50/mile and the last three falling around 9:10/mile, but it doesn’t bother me because I feel like I paced well. I held back in the beginning and pushed in the end.

I didn’t get at PR (not even close), but I was very happy with how my legs held up considering I did my long run (15.5 miles) two days before. I had a good time, and I’m glad I ran the race even though I had my doubts in the beginning.

Finished! [I never know what to do with my arms in pictures. Does anyone else have this problem?]

Have you ever run a race you weren’t excited about? Is there a portion of your running route you consider to be your arch nemesis? And, what on earth should I be doing with my arms in pictures?