I’m back! Monday was my first run after my 3 week break, and it was just delightful!

I ran in legwarmers. I had worn them to work, and they were soo comfy!

I was let out of work early because of the impending storm, so I was able to head outside for (probably) one last outdoor run of the season. I planned to take it easy for 20 minutes and just see how everything felt. My goal was to have fun, and not push it. It would be totally insane to get hurt by coming back too fast from an “injury prevention” break. 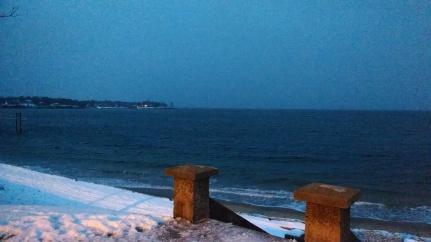 You can’t even tell it’s about to blizzard, right?

I headed to the ocean, my favorite view. But the view wasn’t the only reason I wanted to run out that way. On the previous Saturday, Jeff and I had gone out to the park to play in the snow, and I wanted to see how our snowman was holding up. (Hint: not good!) 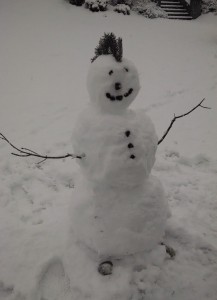 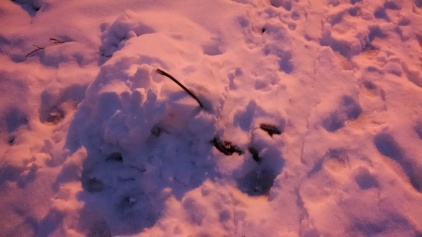 By the time I had reached the beach, the wind was kicking it up a notch, but it didn’t really start snowing until after I had made it back from my run. I ended up with about a mile and a half for my 20 minutes. I took it slow, and there was a fair amount of slowing down for ice, pictures, and snowman investigation. I saw 3 other runners (one who waved and said “what blizzard”…haha…it was on it’s way dude), all trying to get in one last run before the storm.

It wasn’t much of a run, but it was certainly fun, and that’s exactly want I was looking for. 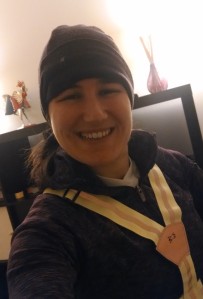 After that first run back, I ran twice more (both on the treadmill) to bring my weekly total to 3 runs (and just over 12 miles). Wednesday’s run felt pretty tough, but Saturday’s went really well. I’m obviously not at my fastest, but I’m pretty happy that running doesn’t feel awful.

When was the last time you built a snowman?

Ever run in a blizzard? (I have…but not this one)

6 thoughts on “This week, I went running.”