Now that I started this last week, I’m going to do my best to keep it going. 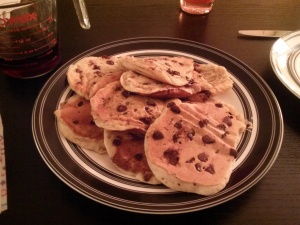 Last week, I set my goals as:

I didn’t get everything on my list done, but I still feel good about everything I did. I’m kind of surprised that I’m not more disappointed about cutting my long run short, but I’m not.  I think it’s because I had just done 10 miles the week before without a problem. I like that I put two of each distance in my long run schedule, takes some pressure off.

This week, I’m hoping to:

Have a good week! I hope you’re adjusting to daylight savings..blech!

March has a lot of holidays! You don’t always think of March as being full of them, but it really is. For example, today is both National Pancake Day AND Mardi Gras!

IHOP created National Pancake Day in 2006. They give you a free small stack of pancakes and ask for a donation which they give to children’s hospitals. I haven’t participated in IHOP’s version of Pancake Day, but I’m making pancakes for dinner tonight!

How this all affects my running: I’ll be doing speed work on Thursday instead of today because, obviously, pancake day is a day for being with FAMILY.

Got my ingredients ready…10 hours early 🙂

I haven’t made the pancakes yet, so you get a picture of the ingredients instead.  Just think how lucky you are because now you know my secret ingredient! Hint: It’s the seltzer water. If you use seltzer instead of regular water, the pancakes are fluffier. (At least that’s what the box says.) Also, I’m sure you’ve noticed that I’m going to use a box of waffle mix to make the pancakes. Don’t worry, this is not a mistake. Just remember, the most important part about choosing a pancake mix isn’t that it says “pancakes” on the box; it’s that you only need to add water.  Who can predict when you’re going to have eggs, milk, or oil on hand?

Since you can see I’m well prepared for pancake day, you’re probably wondering what I have in store for Mardi Gras. Unfortunately, I don’t really know what you’re supposed to do to celebrate if you live outside of New Orleans. I think stuffing myself with pancakes is appropriate (after all, Mardi Gras = Fat Tuesday). The only other idea I have is that my friend Mike (from Louisiana) gave me a mix CD of Mardi Gras music, which I can play during our pancake party. Sorry Mardi Gras, pancake day is overshadowing you.

Check out the rest of the March Holidays:

Did I miss any? What’s your favorite March Holiday? Are you celebrating Pancake Day?